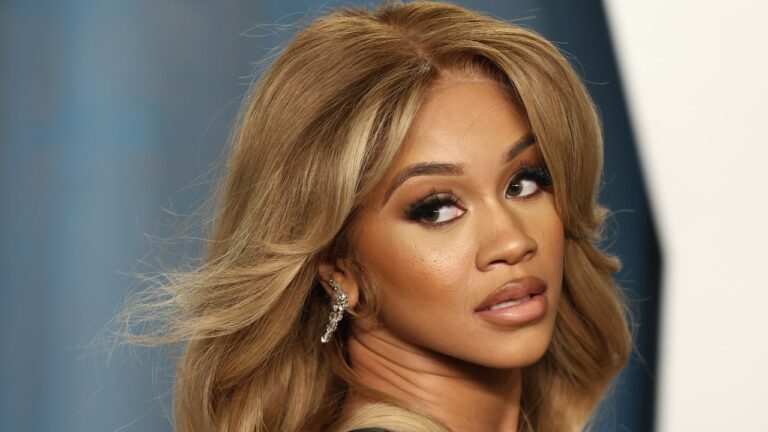 There are two things we usually expect Saweetie: a colorful wig that flows down to her butt and shiny nails that are basically longer than a CVS bill. When we recently spotted the Bay Area rapper without her usual wig or claws, we had to do a double-take to make sure it really was the captain of Icy Grl. In all honesty, we almost didn’t recognize her with the long, wavy brown ponytails, short nails, and cutest white hat covered in stuffed animals that she wore to the 49ers vs. Cowboys football game on Sunday, January 22nd.

The Best Friend rapper made sure to show us her game attire and beauty look from multiple angles, which is why she made three separate Instagram posts the day after the game, including a video showing off her impressive throwing arm. The first post featured a single close-up selfie of the star throwing up a peace sign with pursed lips, giving us flashbacks to the duck-face era of the late 2000s. You can see the caramel brown hair tied in two ponytails as well as hints at her super short manicure.

A few photos in the second post give a better look at Saweetie’s outfit and the length of those warm brown braids. The wavy ends of the braid fell well below her chest. Unfortunately, none of these posts gave a clear look at her nails. They look cloudy in one picture and maybe shimmery in another, but what we do know for sure is that the nails are very short.

Jennifer Lopez is in another wedding movie, and the hair is already sending me – see photos

How to create your beauty counter business plan