Based on Joyce Carol Oates’ 2000 novel of the same name, Andrew Dominick’s highly anticipated film explores the identity of the troubled star of her stage persona and first name, Norma Jeane Mortenson. And the route to its release was just as controversial as the blonde bombshell. Blonde made headlines for earning Netflix’s first-ever NC-17 rating, and there were rumors of reshoots and makeovers on the DeuxMoi Instagram account.

Internet noise aside, the film offers a hauntingly dark and personal look at the legendary star, thanks in no small part to de Armas, who successfully impersonates Monroe. The entire process of the actress’ transformation into the iconic blonde took two to three hours a day during filming. Ahead, Blonde Head of Hair Jaime Leigh McIntosh and Head of Makeup Tina Roseler Kerwin, share the full details of what led to de Armas’ transformation into Monroe.

This article originally appeared on instyle.com 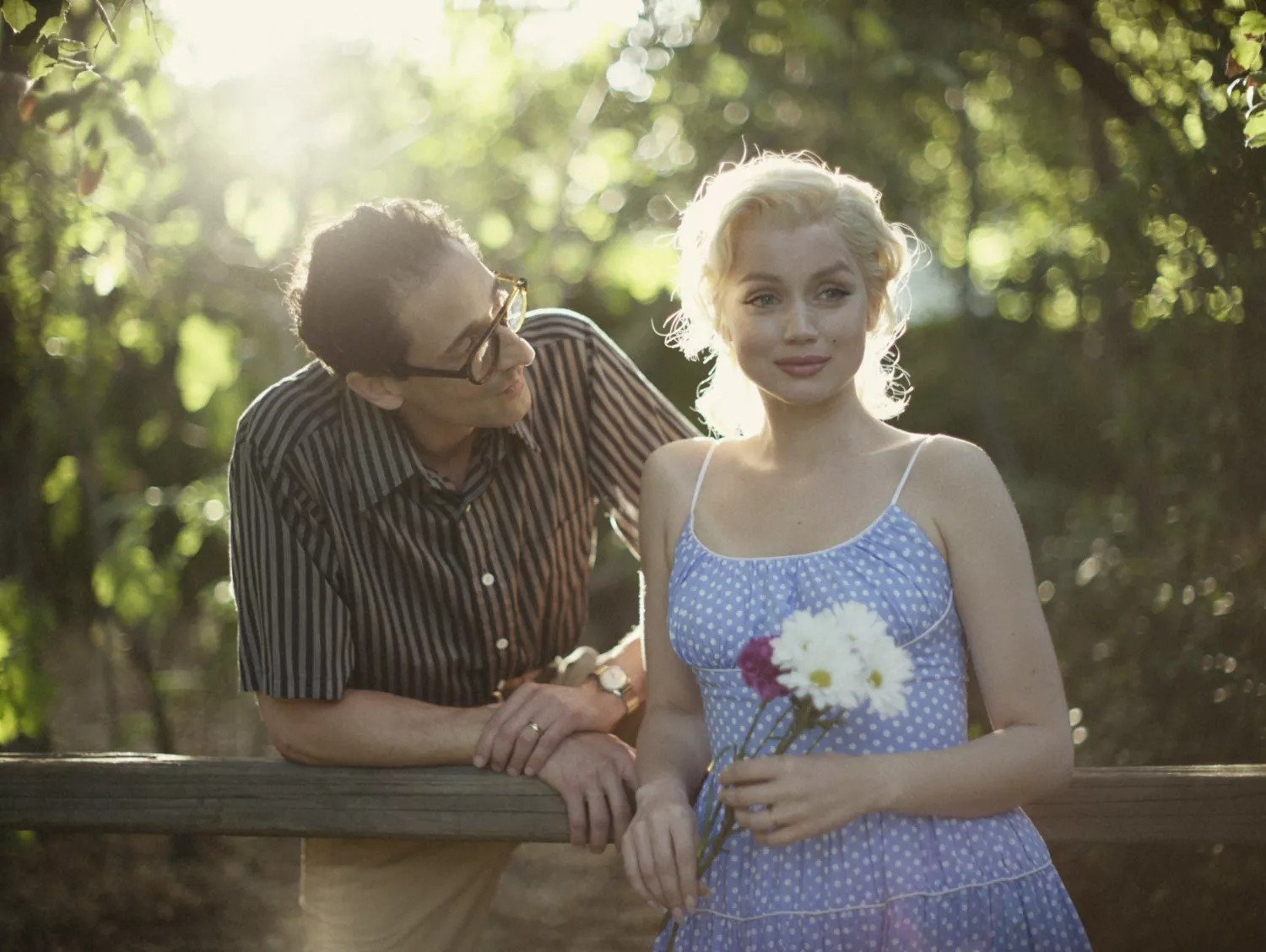 After reviewing the script, the team set to work figuring out which of Monroe’s iconic looks they needed to recreate. Because there are many photos of the star, they spent days prior to the shoot studying up to 36 images of a single look and engaging in a lot of trial and error to get each one just right. However, it was important that the hair and makeup didn’t look like de Armas was wearing a Monroe costume.

“One of the first things Andrew [Dominick] told me I can’t do Ana’s makeup with Marilyn; I have to transform Ana,” Kerwin tells InStyle. “So it was important to find the little tweaks that would make it more Ana. We just needed a little trial and error.”

Iconic is the only word that adequately describes Monroe’s platinum blonde hair. The hairstyles in the film were created using five wigs by LA-based wigmaker Rob Pickens under the supervision of McIntosh.

When dying the wigs, it was important to end up with a light shade of blonde that also matched de Armas’ skin tone. Two shades were also created to represent Norma Jeane’s darker hair.

“We had a brunette Norma Jeane, we had a very golden blonde Norma Jeane, and both were customized,” says McIntosh. “They were store bought and [we] adjusted the front to have the Marilyn hairline. Then I had two creamy blondes that we often see in movies; only two different lengths from those set with wet rolling. And then we had our platinum wig, which you see mostly towards the end of the movie.”

A balding prosthesis was the real key to making the wigs look believable. “Due to the fine detail and light hairline of these wigs, there was simply no other way to hide Ana’s dark hair,” says McIntosh. “We just had to completely erase Ana’s hairline and the depth that was underneath.”

“Jaime Lee had figured out before I got there that the blonde wigs didn’t work if they went straight on her hair. So there was a bald cap that was basically the front part of her hair,” adds Kerwin. “There was a prosthesis for transparency and durability so we could detach and reattach the wigs as needed.”

Once they decided to use the prosthesis, the team realized that de Armas’ naturally full, dark eyebrows also needed to be altered. “As soon as she put the wig on, we knew we had to change her eyebrows,” Kerwin says. “We contacted an eyebrow specialist to minimize and bleach her eyebrows the first time, and then we did the grooming during the shoot. Jamie Leigh mixed the color and we rebleached it every few days.” 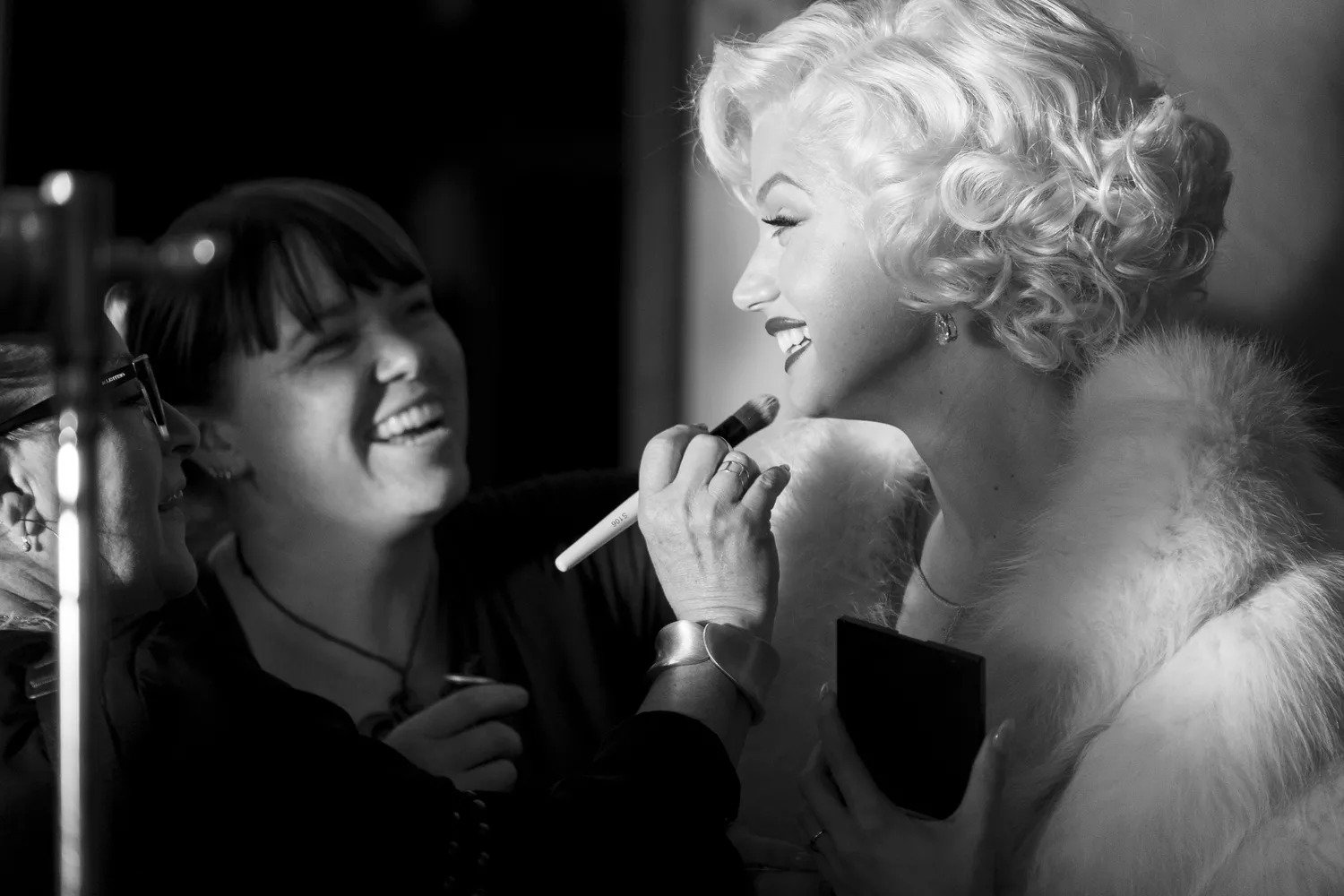 “When we were researching the wigs, we had to consider Marilyn’s hair texture,” says McIntosh. “We had to find images of her natural texture that hadn’t been styled yet, just so we had the right foundation and foundation to work on as I did the hairstyles.”

McIntosh says many Marilyn wigs have too much hair and it makes them look costumed, so she worked with Pickens to get the density right. Once the wigs were set with wet rollers, McIntosh would “brush them out so they were looser and messier, and [would] squirt it down with some water” to match the reference images for the scenes. She would also fake shorter lengths by toning the curls.

The internet is full of articles and guides on how to pull off Monroe’s makeup look, and her lipstick is the element that ties it all together. Kerwin says she tried a “truckload” of lipsticks to find the perfect shades that not only embodied Monroe but also worked with the film’s color and black-and-white lighting.

“I had one that I renamed ‘Niagara Pink’ and it was the only one that really worked in this kind of Technicolor image that we were doing,” says Kerwin of the Guerlain lipstick. “I don’t think there’s a lip company that we haven’t put through the ringer to find out. And of course we went to Guerlain because that was one of the companies Marilyn used.” 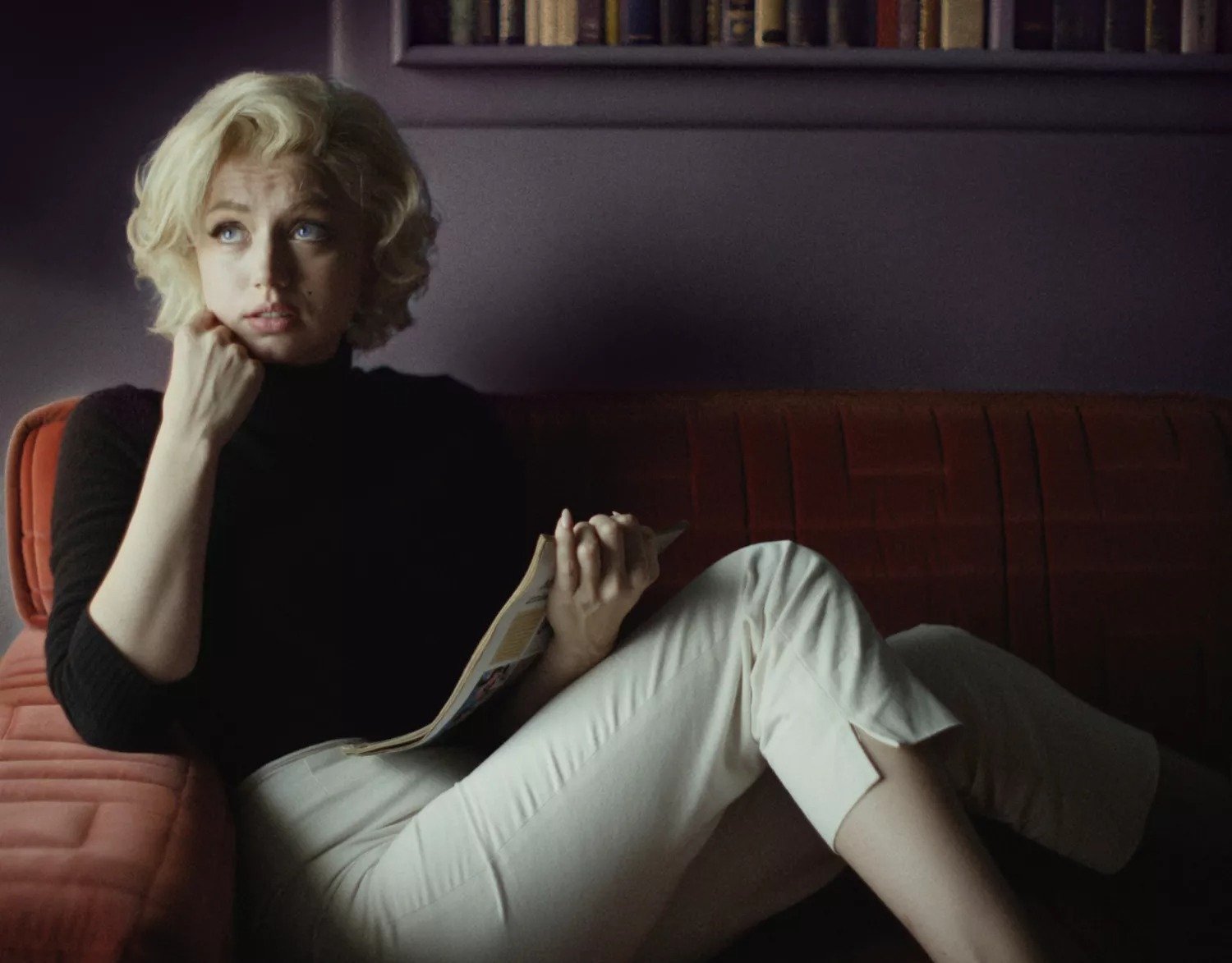 Monroe was also known for her clear, glowing skin, and her coveted skincare routine was beauty folklore with reports that she liked to smear Vaseline on her face. One of Monroe’s most popular skincare brands, Erno Laszlo, even shared the exact products she used from her line.

To recreate Monroe’s radiant complexion, Kerwin relied on Charlotte Tilbury’s Hollywood Flawless Filter. “I tried several foundations to mimic Marilyn’s glow but this one was very reflective so it reflected the light and gave her the look of that period but also this glow that she had on her face,” says the makeup artist. artist . “This was a game changer for that part of her look, so I was really grateful to have found it.”

The final bit of Marilyn’s look is the beauty mark on her left cheek. Kerwin grabbed a black-brown liquid eyeliner from Make Up For Ever to create the birthmark on de Armas. “We tried several different ones and the black was too black,” says Kerwin. “We settled on this one and then it was all about finding the right spot that would work on Ana’s face.”

Kerwin notes that you’ll see the mole on de Arma’s chin a few times in the film to align it with the periods when Monroe moved it there.

9 Statement Plus Size Coats to Keep on Your Radar